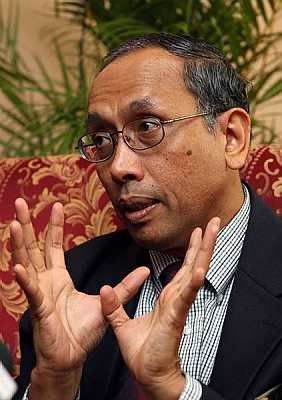 Ahmad Fuad Embi is married to Noraini Kassim and has three children and two grandchildren.  In his free time, he enjoys playing tennis and cycling.

Fuad was a professional engineer with the Department of Drainage and Irrigation (DID) Malaysia beginning in 1976 and retired as Deputy Director General in 2007.  He was instrumental in changing government policy from a “hard engineering” or purely structural approach to controlling urban and river floods, to a more “sustainable” approach of detention and flood plain storage.  Also, he successfully pushed for “rainwater harvesting” to be compulsory for all new housing developments and erosion and sediment control plans for all construction site earthworks.  Since 2008, he has worked as a freelance consultant in river engineering and stormwater management.

Since 2010, he has been an Adjunct Professor, Universiti Kebangsaan Malaysia where he started an MSc program in erosion and sediment control at the civil engineering faculty in 2017.

His professional affiliations include, Registered Professional Engineer (PE) with Board of Engineers, Malaysia – No. 5332, Certified Professional in Erosion and Sediment Control (CPESC) – No. 4155, and Vice President, Malaysian Stormwater Organization (MSO) – Founder Member.

Fuad led the Malaysian team to arrange for the CPESC program to be introduced to Malaysia in 2006, a move which probably raised awareness of the need to further internationalize CPESC.  There is no doubt that most parts of the world, especially developing countries, need such a program. There seems to be a vision now that ECI should be the standard bearer to expand its certification programs all over the world, especially now that it is clear that there are few, if any, such service providers in other developed countries.

He also drafted the agreement between MSO and ECI which was signed in 2013.  This could be the model to be further improved, with other developing countries in particular and acted as the main contact person between ECI and MSO, in resolving problems.  He also wrote the detailed audit report for MSO, as part of the requirements of the 2013 agreement between MSO and ECI.

Fuad led efforts to get Malaysian government recognition of the ECI certification programs, which is finally successful with the latest policies (only a month ago) requiring only CPESC (“or equivalent”) certified to be allowed to prepare erosion and sediment control plans for construction sites.  He successfully pushed for an Asian Water Group workshop next year to introduce the approach of “certification programs”, in particular those of ECI, to neighboring countries in South-east Asia.  Hence there will be a greater demand for ECI certification programs in future.

Throughout 32 years of service with the Drainage and Irrigation Department Malaysia, one of the most glaring anomalies that I noticed was the very poor control on earthworks in development activities.  Rivers were without exception heavily sedimented every time there is heavy rainstorm – which is a few times a week in a tropical country like ours.  There does not seem to be a solution to the problem, although we tried for years to effect changes through conducting awareness courses.

It was only when we got involved with this organization called CPESC Inc. in the USA, that we finally started to make progress.  In retrospect, it should have been expected that trying to effect changes in ground practices from scratch will take a very long time – as compared to adopting a refined product from other countries which has already gone through years of developing it.

The biggest satisfaction from grinding through all the volunteer work is actually the suddenness with which a solution can appear out of nowhere to resolve a difficult problem.  This has happened time and time again.  We would get bogged down with a particularly frustrating issue for long time, when nothing seems to work. Then suddenly, like a golden egg from the sky, a solution would appear.  This happened right from the beginning when we conducted “awareness” courses on erosion and sedimentation for years without any effect on the ground.  Suddenly, one day, there appeared a participant, a Malaysian (Wing Leong) who had worked in the United States for some 20 years as a civil engineer.  He told us that in the US there is a non-profit organization called CPESC which was doing the same thing that what we were trying to do: effect erosion and sediment control on construction sites – only that they were already doing it much earlier and has already refined their approach to one of “certification of professionals” in erosion and sedimentation control.  He arranged for us to meet the Board of CPESC then, in 2006. From then on it gradually took off.

There were many such incidents, which marked milestones in our push for a better river environment.  Those religiously inclined would of course attribute such incidents to “gifts from God”.  Whatever they are, they certainly make it worth our while to stay the course.  Most certainly in my case.

In Malaysia, as in almost all other developing countries, erosion and sediment control (ESC) is a huge problem that remains to be properly addressed in land development activities.  The problem is made worse for tropical regions where average annual rainfall exceeds 3000 mm (120 in) resulting in heavy soil loss and badly impaired rivers throughout the region. On a global scale, there is undoubtedly an impact not only on fish and aquatic life in the rivers, but also in the coastal areas where fish life is already depleting from a myriad of other pollution sources.  ESC Plans were only made mandatory for the construction sector in 2004 in Malaysia.  However, plans were mostly poorly prepared and ineffective due to a general lack of competency in ESC among consultants and regulators.

In 2006, four Malaysians met up with the board of CPESC Inc., at their meeting in Denver, Colorado. They made a request that the CPESC program be extended to Malaysia and the certification exams conducted locally.  In 2007, the first CPESC exam was held in Penang and in 2008 the Malaysian Stormwater Organization (MSO) was founded as a non-profit body to promote awareness and competency in stormwater management, especially ESC, to government regulators as well as private sector consultants and contractors. In 2011, MSO signed an agreement with ECI as chapter for the region.  More than 400 registrants have been registered with ECI as CPESC, CESSWI and CPSWQ since 2007.

The programs led the Department of Environment to make it compulsory for only CPESC or equivalent certifications to prepare ESCP for areas requiring Environmental Impact Assessment (EIA) in 2011.  This requirement is expected to be extended to all other construction outside of EIA areas in Peninsular Malaysia by end 2017.

MSO is working to extend ESCPs to other major land disturbing sectors: forestry, mining and agriculture (in particular plantations).  It is also working towards introducing the certification program to other countries in the region like Cambodia, Vietnam, Philippines and Indonesia which urgently need it.  A workshop is being scheduled for next year in Malaysia.